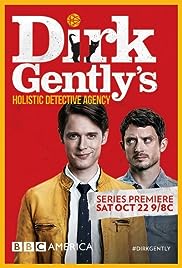 Super-weird stuff is going on, and a holistic detective says it’s all connected. Even weirder: He appears to be right. BBC America has ordered a 10-episode second season of original scripted series Dirk Gently’s Holistic Detective Agency for premiere in 2017.

Douglas Adams once wrote a detailed explanation of how to tell the difference between Friday and a fried egg. Welcome to the world of Dirk Gently’s Holistic Detective Agency; a trippy mystery that thrusts a reluctant sidekick into the bizarre world of an unconventional .